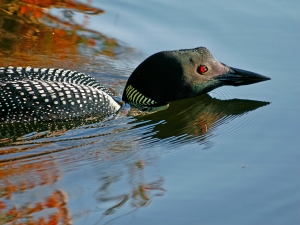 As soon as the sun went down, the capture began.  We set off Tuesday evening from Gorham, Maine and headed to Crystal Lake in Massachusetts. The banding team included a veterinarian, two field biologists and me. We took off from shore in a canoe. One person drove the boat. Another person searched for loons. I sat at the front of the boat, illuminating the lake with a spot light. At first all we saw were geese. Then suddenly we spotted a pair of loons with their two chicks. I kept the light focused on the loons as we moved the canoe towards them. To draw the loons closer to us, we played recorded loon calls. Next, the actual capture began, which, from my perspective, went down extraordinarily fast. In what felt like seconds, the loons were scooped up head first into the net and out of the water. Our first capture was the female loon followed later by the male loon with their two chicks.  With the loon wrapped in a towel, we headed back to shore to take measurements, band the bird and take blood samples. As I sat holding this loon, I learned some important things.  One, when holding a bird, always wear pants. Capturing and banding loons, while exciting, is not glamorous work. In addition to the thick clouds of bugs surrounding me, my legs were covered in a layer of bird poop by the end of the night.  My running shorts provided me with little protection. Thankfully, vet school has done wonders improving my tolerance for gross things. Two, loons are strong birds. It was more difficult than I had envisioned holding down both her legs and wings as everyone rushed to complete everything.  The night ended around four thirty in the morning when I rolled or rather collapsed into bed.  The loon family was safely returned to the water and reunited with each other. Overall, my first time helping capture and band loons was pretty amazing.   For future captures though, I’m wearing pants.